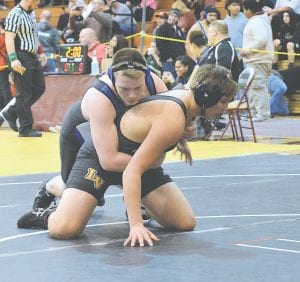 CLIO – The Carman-Ainsworth wrestling team competed in the Clio County Clash on Saturday at Clio, with one wrestler, Trevon Bennett, securing first overall in his respective weight class.

At 285 lbs., Bennett started his day with a bye before defeating Swartz Creek by fall in the quarterfinal. Bennett earned his spot in the final with a win over Powers Catholic in the semifinal by fall and went on to win his weight class with a win over Davison by decision.

At 103, Jabril Muhammad lost his opening match to LakeVille by fall and was then knocked out of the tournament with a loss to Lapeer by fall. Omar Al Hallak began his tournament with a win by fall over Fenton, but then lost to Millington by fall in the quarterfinal. In the second consolation round, Al Hallak lost to Davison by technical fall to end his run.

Larry Brown Jr. began his day at 130 with a loss to Grand Blanc by technical fall before receiving a bye in the first consolation round. In the consolation semifinals, Brown Jr. lost by major decision to Mt. Morris. At 145, Jacob Petty started his day with a win over Lapeer by decision, but then lost in the quarterfinal to Mt. Morris. Petty then received a bye before losing to Fenton.

Randall Broome, at 215, lost his opening match to Swartz Creek by fall, but bounced back with a win by fall over Fenton in the first consolation round. Broome then lost to Millington by fall to end his tournament.

Carman-Ainsworth was at Davison on Wednesday after we went to press and will compete in the County Meet, also at Davison, on Saturday.

The Carman-Ainsworth bowling team opened the 2018-19 campaign at the Bay City John Glenn Invitational on Saturday. The first three games were five-bowler games and the next four Baker games, which resulted in the Cavs qualifying for ninth place.

They would faceoff with eighth-place qualifier Bay City Western, falling in a three-game set, 471-505. Boys scores were not reported.

The Cavs head into the holiday break and will not return to action until Jan. 3 against Midland Dow at Alert Lanes. – B.P.