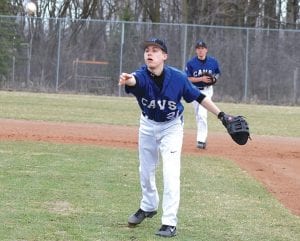 Carman-Ainsworth’s Noah Reed tosses the ball back to the plate as the Bendle player was called out at first.

FLINT — The Carman-Ainsworth baseball team threw two no-hit shut outs, 16-0, 16-0, against Flint Northern on Tuesday in a makeup game from April 18 that was rained out.

At the plate, having a hit and driving in two runs each were Brandon Bobcean, Andrew Ramirez, Entrice Mitchell, Ethan Lambitz and Sheridan Cox.

On Monday, Carman-Ainsworth swept Flint Powers, 3-0, 5-1, in another makeup from April 11. Brennan Gleason threw in the opener giving up six hits and fanned 12. Lambitz went 6 1/3 innings in the nightcap, giving up two hits and Alex Thompson finished out the game striking out two.

Key hits came from Justin Hubbard with a hit and a RBI, Mitchell had four hits and Jamal Dixon had a hit, two RBI and a double.

The Cavaliers, 5-0 on the season, host Flushing today as league play continues. 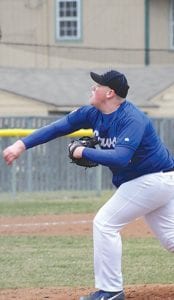 Carman-Ainsworth’s Justin Hubbard pitches for the Cavaliers against Bendle on April 17.