Cavaliers blaze past Bobcats in opener 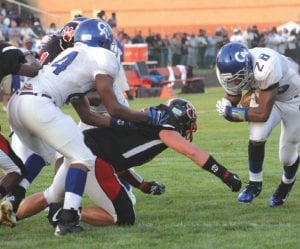 Gerald Holmes finds a hole in the Grand Blanc defense en route to some of his 162 yards.

The Cavaliers looked even better on the field.

Loaded with speed at the skill positions, Carman-Ainsworth raced past Grand Blanc, 27-12, in the season-opener last Friday at Don Thomas Field. Demarion Allen scored two first-quarter touchdowns on long plays, and Gerald Holmes broke another long scoring run in the third period as the Cavs snapped a three-game losing streak against the Bobcats. Carman-Ainsworth hadn’t beaten Grand Blanc since a 61-21 thumping in 2007.

Allen opened the scoring with 5:29 left in the first quarter, catching a 23-yard touchdown pass from Connor Storms after getting some separation from the Grand Blanc defender near the goal line. The extrapoint kick was blocked by Grand Blanc’s Luke MacLean.

The score capped a 10-play, 74-yard drive on Carman-Ainsworth’s first possession, but the Cavs didn’t take nearly that long on their next score. On their first play from scrimmage after a Bobcat punt, Allen sped around left end for a 71-yard touchdown sprint with 42 seconds left in the first quarter. Storms kicked the extra point for a 13-0 lead. 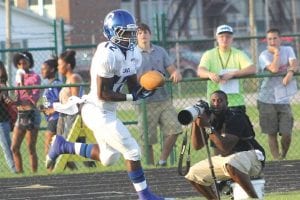 Grand Blanc answered with a 95-yard kickoff return by Isaiah Collins on the ensuing kick to pull within 13-6, but Carman-Ainsworth resumed control thereafter. Another lengthy drive resulted in a 3- yard touchdown run by Gerald Williams with 6:17 left in the half. Storms’ extra point made it 20-6 at halftime.

Grand Blanc drove to the Carman-Ainsworth 30 in the third quarter, but an interception killed the threat, and the Cavs struck immediately. Holmes sped 78 yards on the first play for a touchdown and a 27-6 command with 4:53 left in the period.

Holmes finished with 162 yards on 14 carries and Malik Seales added 51 yards on 12 rushes as Carman-Ainsworth rolled up 319 yards on the ground. The Cavs outgained the Bobcats, 406-317, in total offense.

Carman-Ainsworth will play its home opener at 7 tonight against Saginaw Heritage. The Hawks opened their season with a 27-14 loss to Walled Lake Central.