Cavaliers blown out by Flushing 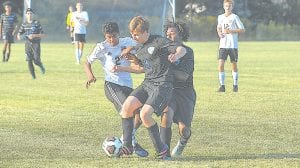 Carman-Ainsworth’s Jacob Yost cuts off a defender during last Wednesday’s game against Flushing.

FLUSHING – Carman-Ainsworth boys’ soccer tallied a road loss to Flushing on Wednesday, falling 7-1. Omar Abdalla scored the only goal for the Cavaliers on an assist from Tommy Taylor. Flushing’s Jake Long had three goals and Joe Griffus, Nick Anderson, George Abuaita and Nick Morrison all had one apiece.

The Cavaliers were scheduled to play Owosso on Monday, but the game was canceled due to weather. Carman-Ainsworth hosts Linden today. – K.R.