Cavaliers bounce back against Arthur Hill 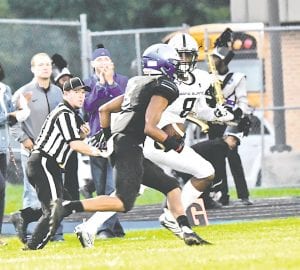 Carman-Ainsworth’s Idris Bray makes a move on a Grand Blanc defender during a game on September 14. Photo by Terry Lyons

SAGINAW – The Carman-Ainsworth football team bounced back from two straight losses in a big way during a 44-6 win over Saginaw Arthur Hill last Friday.

Chris Coleman opened the scoring early in the first quarter with a 20-yard touchdown run to give the Cavs an early 8-0 lead after a successful 2-point conversion with 9:44 remaining. Later in the quarter, with just under three minutes to play, Armani Washington got the Cavs on the board again, this time scoring on a two-yard scamper. An unsuccessful 2-point conversion left the score at 14-0 headed into the second.

The Cavs added two more scores in the second thanks to a one-yard rushing touchdown from Keshawn Keyes with just under 10 minutes to play. That was followed by a four-yard keeper from Dustin Fletcher with 3:30 remaining in the half for a commanding 28-0 lead. Arthur Hill responded with a 59-yard touchdown pass with 1:14 to play in the half to bring the score to 28-6, but that would be the only time the Lumberjacks would score for the game.

After the break, Fletcher wasted little time getting the Cavs back on the board, hitting Idris Bray from five yards out for a touchdown with 11 minutes remaining in the third. A successful two-point conversion brought the Cavs’ lead to 36-6. Just 15 seconds later, Dustin Fletcher completed a 17-yard touchdown pass to Mike Fletcher, followed by running it in for a successful 2-point conversion for a 44-6 lead. Neither team added any points for the remainder of the game.

Defensively, Tanayshio Dones had four solo tackles and three assists to lead the Cavs. Barron had two solos with one assist and Ronnie Pompey and Marques Parker each had two solos.