Cavaliers bounce back against Flushing 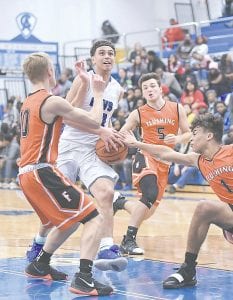 Carman-Ainsworth’s Dustin Fletcher absorbs contact as he drives the lane during Friday’s win over Flushing. Photo by Todd Boone

The Cavaliers led only 10-6 after the first quarter, but an 18-2 run left Flushing in a 28-8 half-time hole. The Raiders outscored Carman-Ainsworth 14-4 in the third, but the Cavs finished the game on a 16-7 spurt.

Stats were not provided by the Cavaliers’ outside stat company in time for press deadlines.

The victory put the Cavs back in the win column after losing to Div. 3 topranked Flint Beecher 57-50 in the Steve Schmidt Roundball Classic on Dec. 27.