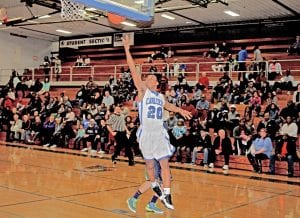 Ja’Kavien Lewis goes strong to the basket for Carman-Ainsworth.

“We’re a young team, but I started the seniors and they played most of the first and actually won the quarter 9-8. They got us off to a decent start,” said coach Jay Witham. “In the second half our defense, once again, saved us. It allowed us to get some turnovers and some easy baskets plus some kick-outs for some outside shots.”

In a game rescheduled from Feb. 9, Carman-Ainsworth won at Flint Metro League rival Fenton on Monday 68-57. While the Tigers did give the Cavs a run by claiming offensive advantages of 17-15 in the second quarter and 17-14 in the third, the difference proved to be Carman-Ainsworth outscoring Fenton 18-12 in the first and 21-11 in the fourth. Scoring 19 for the Cavaliers was Terry Armstrong, Michael Fletcher added 16 points and Omari Duncan and Ja’Kavien Lewis scored 14 and 10, respectively.

With the stands filled to near capacity, Carman-Ainsworth traveled to Flint Southwestern last Friday for a SVL-South game that it won 74-57. Having claimed a 17-12 lead to start the second, the Cavs allowed a 3-pointer to Southwestern’s Ivan Warren before extending their lead to 22-15 at 4:19 and 25-15 at 3:43. That was due to a basket by Lewis and 3-pointers from Josh Jackson and Aaron Williams.

“Our biggest thing was first taking care of the defensive end. Being disciplined, getting the rebounds and then getting out and running on the transition,” said Witham. “Offensively we just wanted to run our stuff and try and get to the basket as much as possible. We’ve played a lot of basketball and had a lot of big games, so our guys played with a lot of poise for just being 14-15 years old. That’s from all the playing they’ve done.”

Once Jaylen Bradley split a pair of free throws for the Cavs, Tevin Taylor and Warren connected for field goals for Southwestern that Fletcher and Bradley countered by combining for five points. After trading baskets once again to make the score 33-22 with 1:15 left before halftime, Carman- Ainsworth’s Duncan and Warren did the same to make it a 35-24 game at halftime.

“I thought we settled for the jump shot a little bit too much when we had size. We should’ve been pounding the ball inside, which we did more in the second half. The guys got after it defensively, which is what we preach so we can get out and run,” Witham said. “(Bradley) is a grinder for us. He took over a new role. Instead of being a guy we give the ball to in the post, now he plays the defensive role and works in the paint for some nice put backs. He’s a nice, big body who’s been with me for three years.”

The third quarter proved familiar as Armstrong and Lewis scored four each, Bradley had three points and Duncan and Fletcher both had two points apiece to put the Cavaliers up 50-38. While Southwestern did pull within 52-43 at 5:45 of the fourth on a five-point run by Warren, a technical foul was called on the Knights head coach at 5:27. That led the Cavs to parlay baskets by Duncan and Lewis and two free throws by Armstrong into a 64-45 advantage with:15 left. Duncan has 23 points, Lewis had 15 and Armstrong had 10.

“(Lewis) is our point guard, and he’s growing. He’s been with me two years now and he’s starting every game now. He’s a General on the floor,” said Witham. “Sometimes he goes a little fast for his own good instead of settling down and getting everybody organized, but he’s growing and getting better. He can attack off the bounce, too, and be creative. He’s just an all-around player.”

The Cavs play for the SVL title against Saginaw on Friday at Davison at 7 p.m.