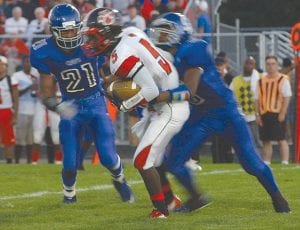 ST. CLAIR SHORES — Carman- Ainsworth appears to be a bit more competitive on the football field this season, but the Cavaliers are still 0-2 for the second straight year.

Carman fell to Warren De La Salle, 34-6, in a non-league game last Friday at St. Clair Shores Lake Shore High. That was a little closer than last year’s 54-21 loss to the Pilots, a Detroit Catholic League powerhouse team that has reached the Div. 2 state quarterfinals, semifinals and finals the last three seasons. Carman also was closer in its opening-week loss to Grand Blanc, losing, 21-14, as opposed to last year’s 21-7 final.

But that’s of little consolation to the Cavs, who are seeking their first playoff berth since 2006. Carman likely will have to win six of its last seven games to end that drought this season.

The Cavs had trouble stopping De La Salle quarterback Zach Bihary, who hit 10-of-16 passes for 159 yards and three touchdowns to lead the Pilots. Carman did intercept him once. Damorria Lilly led the De La Salle ground game with 83 yards on 11 carries. Carman-Ainsworth’s statistics were not available.

The Cavs now dive into Big Nine Conference place, with their next six games against league opponents Flushing, Flint Powers Catholic and Davison. The league is playing home-and-home series again this season.

Carman will visit Flushing at 7 p.m. this Friday. The teams split last year’s two meetings, with Flushing winning, 41-13, at Carman the first game and the Cavs gaining revenge with a 35-14 victory over the Raiders at Flushing in week six.