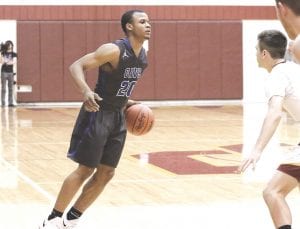 Carman-Ainsworth’s Ja’kavien Lewis sizes up a Davison defender on the wing on Feb on 15.

FLINT—The Carman-Ainsworth boys’ basketball team advanced to the district semifinals after defeating Fenton 68-21 at home in the quarterfinals Monday night. The Cavaliers opened the game on a 25-3 run and never looked back, only allowing 18 points for the rest of the contest.

Carman-Ainsworth shot 57 percent from the field, including 8-for-17 from behind the arc. The Cavs also won the rebounding battle 27-7.

The Cavaliers faced off against Flushing in the district semifinals on Wednesday night after we went to press. The winner will take on the victor of Swartz Creek-Grand Blanc in the district championship at Carman- Ainsworthtomorrowa7p.m.

The Cavalier boys fell just short of making the Div. 1 state bracket on Friday and Saturday in Sterling Heights, finishing ninth in the qualifying block with only the top eight making the bracket. However, Charles Hall did qualify as an individual, but came up short in the bracket against Flushing’s Nick Duchame, 180-141. – B.P.