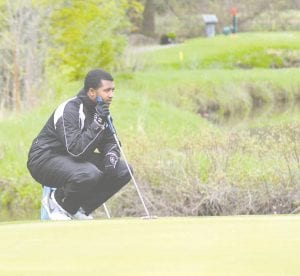 DAVISON — The Cavaliers’ boys’ golf team competed in the second Saginaw Valley League Jamboree on Monday, placing seventh overall with a 390. The match, held at the Davison Country Club, was plagued with rainsoaked fairways and greens, making play difficult throughout the day. Flint Powers Catholic placed first with a 302, Midland was second with a 336 and Lapeer was third with a 337.

Tyson Fields led the way for Carman-Ainsworth with an 89. John Karbowski and Aaron Floyd both carded a 99 and Kaden Rytlewski shot a 103 to round out the low scores for the day.

Last Thursday, the Cavaliers competed in the first Saginaw Valley League Jamboree, finishing in eighth place out of 10 teams with a 372. Flint Powers Catholic was first with a 302, Lapeer was second with a 328 and Saginaw Heritage shot a 335 to take third.

The Cavaliers will be back in action on Saturday at Perry.