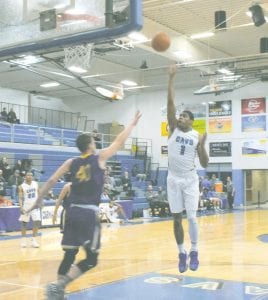 Carman-Ainsworth’s Michael Fletcher launches a floater in the lane against Bay City Central on Jan. 16

The Cavs jumped out to a 19-10 led after the first quarter, but Saginaw closed the gap to 27-23 by the half. The Trojans then went on a 16-10 run, taking a two-point lead into the final frame. Carman-Ainsworth stepped up in the fourth quarter, outscoring the Trojans 19-10 to close out the game and the victory.

The Cavaliers shot 59% from the field, but still allowed Saginaw to shoot 66% on the day, including 9-for-15 from beyond the three-point arc. Carman-Ainsworth won the battle on the boards, outrebounding the Trojans 23-13. The Cavs also turned the ball over 10 times and recorded only one assist on 24 made baskets. 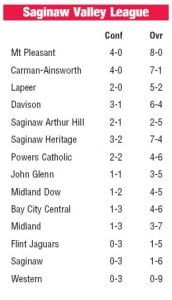