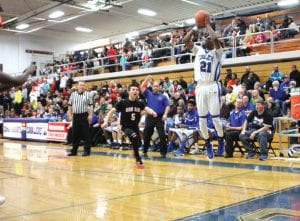 Cameron Morse goes up for the jumper for the Cavaliers at home earlier this season in non-conference action.

FLINT — The Saginaw Valley League’s South division features a gauntlet of challenges that run directly through the city of Flint. Currently, Carman-Ainsworth seems to be the king of this hill after winning 64-37 at Flint Northwestern.

The difference in the contest was the Cavs outscoring Northwestern, 28-14 in the second, after swiping a 13-7 lead in the first. Carman- Ainsworth also claimed a 13-12 scoring advantage in the third and 10-4 in the fourth.

Fresh off of their 80-73 non-conference victory over Genesee County rival Grand Blanc on Dec. 10 to start 2013-14, the Cavs began SVL-South competition last Friday by downing Flushing, 78- 43, at home. Carman-Ainsworth was in charge from the start in this one after bounding out to a 19-14 lead in the first quarter and outscoring the Raiders, 20-12 in the second. Now up 39-26, the Cavs truly started to lock things down by charting a 24-5 scoring advantage in the third prior to closing out the contest by outworking Flushing, 15-12 in the fourth.

Cameron Morse proved to be the story for the Cavs with a team-high 28 points, six assists, three steals and one block, Justice Green had 11 points and three steals and scoring 10 and nine, respectively, were Ja’Quin Jones and Jaylen Bradley.