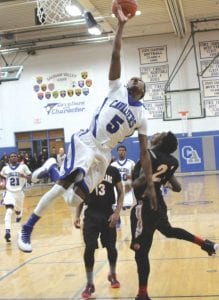 SWARTZ CREEK — The Cavaliers’ varsity boys basketball team outscored Genesee County rival and Flint Metro League member Swartz Creek last Tuesday, 9-1 in the third quarter, and, 20-18 in the second, yet still ended up losing, 57-52. The difference was the Dragons starting the contest with scoring advantages of 16-6 in the first and 22-17 in the second to take a 38-23 lead heading into halftime.

Cameron Morse still managed to stand out for Carman-Ainsworth with a gamehigh 21 points, six rebounds, two steals and one assist, Ja’Quin Jones had 16 points, six boards five steals and two assists and scoring 11 with four rebounds, four steals and an assist was Brandon Walker. Jarell Giles and Jaylen Bradley scored two points each for the Cavs.

For Swartz Creek, Marquavian Stephens had 19 points, nine rebounds, one assist and one block.

In Saginaw Valley League crossover action, Carman-Ainsworth won, 65-59, on the road last Friday by outscoring Midland Dow, 22-16, in the fourth. The Cavs were able to grab a 17-12 lead in the first, only to see Dow take the second, 31-26, and tie the game at 43-43 at halftime. Both teams then went scoreless in the third. Justice Green was the story for Carman-Ainsworth in this one with 21 points, three steals and two assists, Morse wasn’t far off that pace with 18 points, four boards four assists, three steals and one block and Walker scored seven with three assists and three rebounds. Also making his presence felt for the Cavs was Jones with eight points, two assists and two steals, Demarion Allen had a three-point performance and scoring two apiece were Connor Storms and Bradley.

The Chargers were led by Jonathan Bork with 17 points, nine rebounds and a block.