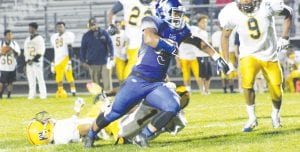 Carman-Ainsworth’s Jalen Lewis digs for extra yards near the goal line in the second half of Friday night’s game against Saginaw Arthur Hill.

The Cavaliers led just 12-8 at halftime but buried the Lumberjacks with three touchdowns in the last 18 minutes of the game to improve to 3-2 and 2-1 in the SVL-Red. Arthur Hill fell to 0-5 and 0-3.

Josh Jackson ran for 117 yards and two touchdowns on 20 carries, and Jalen Lewis also ran for two touchdowns to keep the Cavs contending in the league race. Jackson also hit 7-of-13 passes for 92 yards and a TDs, and Caylen Jones returned a kickoff 82 yards for a touchdown to give the Cavs the lead for good at 12-8.

Carman-Ainsworth slowed itself with 14 penalties for 131 yards, including two that wiped out punt returns for touchdowns by Logan Banister.

The Cavs took a 6-0 lead on their opening possession when Jackson found Jaylen Bradley all alone down the left sideline for a 26-yard touchdown pass with 5:51 left in the first quarter. The score came on fourth-and-16 and capped a 75-yard, six-minute march. 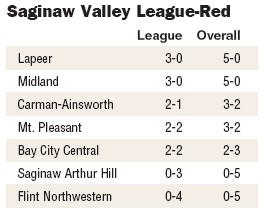 Arthur Hill came back and possessed the ball for the next nine minutes, helped by Carman-Ainsworth penalties. The Lumberjacks eventually scored on a 14-yard pass from Will Harris to Nate Moore with 9:03 left in the second quarter. Harris’ pass to Riley Carrington gave Arthur Hill an 8-6 lead.

The lead lasted just 13 seconds, though, as Jones took the ensuing kickoff at his 18-yard line, cut to the left and raced 82 yards virtually untouched for the touchdown and a 12-8 lead. The Cavs squandered opportunities the rest of the half with penalties, a dropped pass, a shanked punt on a quick kick and an Arthur Hill interception that ended the half.

But the defense kept the Lumberjacks out of the end zone the rest of the night, including a goal-line stand to end the game.

Meanwhile, the offense tacked on three more touchdowns to put it away. Lewis scored on a 5-yard run with 6:07 left in the third quarter, and Jackson’s pass to Banister for a two-point conversion made it 20-8.

The Cavs stopped Arthur Hill twice inside the 30-yard line, then widened their lead to 27-8 on Lewis’ 8-yard run with 6:24 left in the game.

Carman-Ainsworth will visit first-place Midland for a key SVL-Red game this Friday.