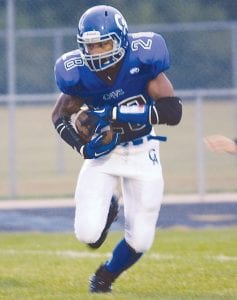 FLINT TWP.
— Their chance at victory might as well have been at the end of the rainbow that arched over Carman-Ainsworth’s football field last Friday. But the Cavaliers never stopped chasing it in a 54-21 loss to Warren De La Salle.

Through a strange mix of clouds, showers, brilliant sunshine and a full rainbow over the east end zone, the Cavs twice fell behind the Pilots by 40 points to trigger a running clock.

But both times the Cavs stopped the clock with touchdowns against a team that reached the Div. 2 semifinals last year.

“They didn’t give up, they didn’t lay down on me, and that’s the one thing I do see in our guys,” said Carman- Ainsworth coach Nate Williams. “But what we’ve got to do is have this burning desire to go after it from the beginning to the end. Nothing gets in our way, and that’s what I’m trying to create here.”

For the second straight week, the Cavs were hurt by turnovers, with two interceptions and a lost fumble. They rushed for just 30 yards and had to go to the passing game, where they picked up 261 yards on 13-of-26 accuracy. But they scored just twice on offense, after that unit failed to score at all last week at Grand Blanc.

“We’ve got to play fundamentally sound and we’re not playing that way right now,” said Williams. “Until that happens, we won’t change those results. We have to play the game the way it’s supposed to be played, and that’s blocking and tackling and executing.”

The Cavs did have some thrilling moments, starting with Shane Barron’s 99-yard kickoff return with 2:39 left in the first half that cut the Pilots’ lead to 27-7.

Barron also caught a 77-yard touchdown pass from Allen Overton with 1:50 left in the third quarter to make it 47-14 and stop a running clock De La Salle had started just 54 seconds earlier.

Overton, a senior left-hander, had replaced Hill at quarterback for the second half and hit 8-of-10 passes for 211 yards. But he also threw an interception that was returned 21 yards for a touchdown, and Williams couldn’t say who would start this week against Flushing.

“I haven’t made a decision on that,” he said. “It’s just that I needed a change and I needed a receiver, and I knew Nick could play receiver, too. We’re dropping too many passes, and that’s missed opportunities.”

Barron caught five of the passes for 115 yards and Hill had two catches for 89 yards. Cortney Weatherspoon had two receptions for 18 yards, including a nice catch in traffic to put the ball in Pilots territory in the third quarter. But the Cavs fumbled on the next play, and De La Salle (2-0) converted it into a 64-yard touchdown bomb for a 40-7 lead. Gerald Holmes led the rushing game with 19 yards on six carries.

“We’re just not executing very well, and that’s on me as a coach,” said Williams. “We’ll sit down Monday as a team and we’ll get this train rolling in the right direction. Right now we’re not rolling at all.”