Cavaliers can’t hang on to first half lead 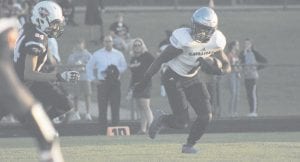 After a blocked punt on Carman- Ainsworth’s first possession, Traverse City West took the lead with a 19-yard touchdown pass from Andy Soma to Seth Gallagher.

The Cavs’ offense came alive in the second quarter. Dustin Fletcher ran for a 27-yard score on the opening play of the stanza and threw a 76-yard touchdown to Norman Montgomery on the very next possession. However, both of Carman-Ainsworth’s point-after attempts failed.

Soma and the Titans answered with a 68-yard drive, taking the lead for good on Soma’s one-yard run. A 44-yard field goal by Finn Durbin as time expired gave Traverse City West a 19-12 lead heading into the half. The Titans then closed the game with 27-unanswered points in the second half.

Full game stats were not provided.