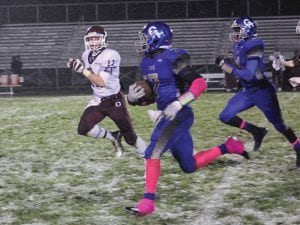 Carman-Ainsworth’s Tyler Minor (7) dashes through the snow for some of his 200 yards against Okemos last Friday. Teammate Josh Jackson (4) comes up to try to block Okemos’ Kyle Krumm.

FLINT TWP. – The weather dictated that Carman-Ainsworth keep the ball on the ground last Friday night, and that was just fine with Tyler Minor and the rest of the Cavaliers.

Minor ran for 200 yards and three touchdowns on 20 carries, and Carman- Ainsworth ground Okemos into the slush by a 27-0 count in a Div. 2 football playoff opener plagued by wet, wind-blown snow at Carman-Ainsworth Middle School.

In a game-long snowfall, the Cavs threw just one pass all night but rushed for 340 yards while holding Okemos to 111 yards, just 10 on the ground. Forced to go to the air, the Chiefs hit just 5-of-14 passes for 101 yards.

Carman-Ainsworth marched down the field on its first possession, taking a 7-0 lead on Minor’s 1-yard run with 9:03 left in the first quarter. Barely four minutes later, the Cavs blocked a punt at midfield but couldn’t cash it in.

Okemos reached the Cavs’ 11-yard line early in the second quarter, but a sack by Nick Keels on fourth-and-7 killed the threat.

Okemos drove to the Carman- Ainsworth 22 with 2:15 left in the third but ran out of downs there. Nate Williams Jr. capped the victory with a 3-yard touchdown run in the fourth and finished with 41 yards on nine carries.

Caleb Ruffin added 67 yards on 19 carries and Jalen Lewis ran for 44 yards on four attempts. Christian Smith led the defense with six tackles and Keels finished with four, three of them for loss.

The winner of Saturday’s game will face either Farmington Hills Harrison, 8-2, or Walled Lake Western, 9-1, in the third round.