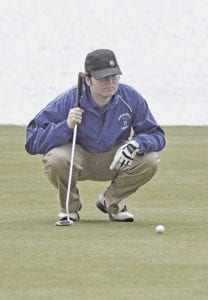 METAMORA – Through rain and shine, golfers from 21 schools across the area made their way to Metamora Golf and Country Club to compete in the 28th annual Lapeer Tune-Up last Friday. In the end, it was Oxford that won the title with a 323. Lapeer finished in a close second with a 327 and Fenton followed in third with a 339. Carman-Ainsworth posted a team-total 465 for 20th.

“We’re just happy to get it through. The weather is cooperating, it’s probably one of the nicest days we’ve had in a while,” noted Lapeer coach Steve Stearns midway through the tournament. “There’s a lot of young kids out there, there’s a lot of kids struggling, but there’s also some good players. But we’re happy to get it in and get a tournament under our belt and see what we can work on.”

As far as course conditions, Stearns noted the course couldn’t have responded better to the harsh conditions that pummeled it earlier in the day.

“Andy Dalton is the head greenskeeper out here and he does an excellent job,” continued Stearns. “The greens are in excellent condition, the course drains really well, it’s really playable. We play lift, clean and place and rake, clean and place in the bunkers. But the course is in great shape, it’s always windy so it’s going to play a little longer because it’s soft, but it’s in good shape.”

Golfers began their day around 9:30 a.m. and ended it right around 4 p.m., with the few remaining teams filing in around 4:30 p.m. For many teams, this was their first time out this season.