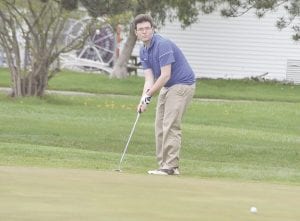 John Karbowski of Carman-Ainsworth watches his putt during the Genesee County Tournament on Monday. Photo by Austin VanDaele

GRAND BLANC – The Carman- Ainsworth varsity golf team traveled to the Flint Elks Lodge #222 to compete in the Genesee County Tournament on Monday. The Cavs only had three golfers available for the contest, meaning they were unable to post a team score. Powers won the event with a 321, Grand Blanc was second with a 328 and Fenton third with a 331.

John Karbowski led the Cavs with an 84 on the day. Aaron Carter finished with a 109 and Nathan Ratynski carded a 119.

Carman-Ainsworth was at a Saginaw Valley League match on Wednesday after we went to press.