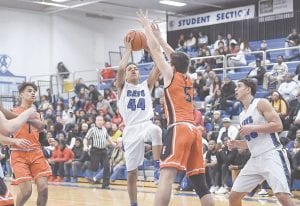 FLINT TWP. – The Carman-Ainsworth boys’ basketball team won its third-straight game Tuesday night, destroying Heritage 75-54. The Cavaliers have been playing with purpose after losing only its second game of the season on Dec. 27, outscoring opponents 193-123 during the win streak.

The Cavs jumped out to a 14-13 lead after the first quarter Tuesday and were able to extend it to 36-27 by halftime. Heritage remained in striking distance with a 51-41 deficit heading into the final frame. Carman- Ainsworth put the Hawks to bed in the fourth quarter, outscoring Heritage 24-13.

The Cavaliers throttled Powers Catholic 70-40 last Friday. It took the entire first half for Carman-Ainsworth to find its footing, nursing just a 29-20 lead by the end of the second quarter.

The Cavs erupted for a 24-9 third quarter that essentially ended the contest. Carman-Ainsworth closed the fourth with a 17-11 run.