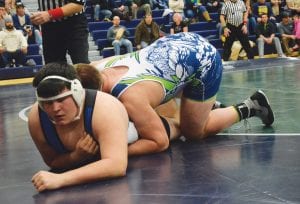 Grayden Hamilton looks to regain control against a league opponent for the Cavaliers at 285.

According to the Week Five rankings listed on www.michigangrappler.com, Derrien Vaughn is also ninth at 135 for the Cavs and Milik Dawkins is third at 160 as of Jan. 20.

At Saginaw Heritage on Jan. 21 in Saginaw Valley League competition, the Cavaliers defeated Heritage 48-36 and Bay City Central 43-42 on the 10th tiebreaking criteria. Going 2-0 for the event were Vaughn at 135, Nathan Delong at 130, Dawkins at 171 and Hamilton. Carman-Ainsworth took the mat yesterday at Saginaw High against Saginaw Arthur Hill. 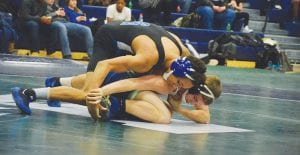 Damian Wilkes works from the top for Carman-Ainsworth during a Saginaw Valley League matchup.