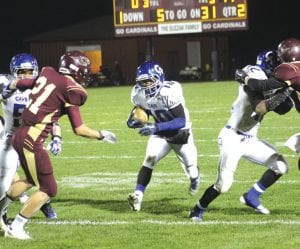 Carman-Ainsworth scored five touchdowns in the first half and went on to a 42-0 victory over Davison in a battle of league unbeatens at Cardinal Stadium.

Jevonte Alexander and Malik Seales scored two touchdowns each in the first half, and the Cavaliers finished 5-0 in the SVL-South and 8-1 overall. They will begin postseason play Friday with a Div. 1 home game against Holt. Davison, trying to keep alive slim playoff hopes, ended at 4-5 overall and 4-1 SVL-South.

Alexander opened the scoring just 2:06 into the game with a 50-yard punt return. Connor Storms booted the first of his six extra points for a 7-0 lead.

Seales took over in the second quarter, scoring on a 3-yard run with 6:04 left in the period. Brandon Walker’s interception one minute later set up Seales’ 28- yard touchdown run for a 28-0 lead with 3:26 left in the half.

The Cavs pushed across on more touchdown just before halftime when Walker took a reverse 48 yards for a 35- 0 lead with 52 seconds left.

With a running clock in the second half, Demarion Allen capped the scoring with a 20-yard touchdown in the third quarter.

The winner of Friday’s playoff game will meet the winner of the Grand Blanc (7-2)-Brighton (5-4) game next week.