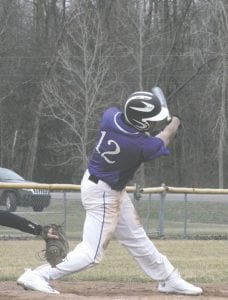 Carman-Ainsworth’s Charles Hall goes through his swinging motion against Goodrich on March 29.

FLINT TWP. — The Carman- Ainsworth baseball team split Monday’s doubleheader with Davison. Carman- Ainsworth eked past Davison in the opener, winning 2-1. Davison took the nightcap 8-3. Carman-Ainsworth won the first game with a walk off winning run in the bottom of the seventh. Davison’s bats were on fire in the late game with six hits in one inning to put the game away.

Last Thursday, Carman-Ainsworth was swept by Midland with a pair of 12-0 shutouts. In the first game, Midland’s pitcher threw a no-hitter.