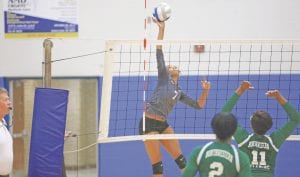 Carman-Ainsworth’s Cashae Harris attempts to put away a kill against Northwestern.

“We played well tonight and everyone was involved,” coach Barb Hurand said. “I thought we served aggressively with 22 aces on the night as a team.

“We played with great enthusiasm and we are steadily improving as a team.” – K.W.