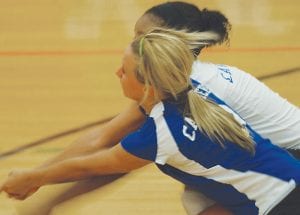 Carman-Ainsworth’s Kylie Schneider and Monica Townsend went for a dig.

FLINT
— Carman-Ainsworth’s volleyball team started the season slow with a 0-7-1 record. A combination of players building chemistry and tough competition led to the slow start. Coach Barb Hurand was excited to see how her team would respond once the chemistry was built and her players believed in each other.

Since the beginning of September, the team has come together and started playing like a team. Junior Kamrin Gold has been outstanding and is the leading player on the court for the Cavaliers on most nights. She has elevated her play and the team has followed her lead.

Since the 0-7-1 start, the Cavaliers have a 10-6-2 record and have defeated some strong opponents along the way. At the Cereal City Tournament at Battle Creek on Sept. 11, the team advanced to the semifinals and finished the tournament with a 4-1 record. The year before, the Cavs went winless at the tournament.

On Sept. 4, Carman participated in the New Lothrop tournament and came away with a third place finish with a 4-1 record. Along the way, the Cavs defeated area powerhouse and 2009 state qualifiers, Lapeer East.

Even though the Cavs are still below the .500 mark, the progress is being made for a strong run at the Big Nine title and post season play. Gold is leading the Cavaliers’ offensive attack, while setter Danielle McClung has been strong as well. Contributions have also come from Kylie Schneider, Brandi Rimmer, Kristina Dik, Aarin Townsend, Re’Onna Harris and Miya Ingram.

Defending Big Nine champion, Flushing, sits atop the league standings with a 2-0 record, while Carman and Davison come in second with a 1- 1 record withe Powers in last with a 0- 2 record.

The Cavs will look to take sole possession of second place or move into a tie for first if they can knock of the Cardinals tonight at home and the Mustangs can defeat the Raiders. On Saturday, Carman travels to the Saline tournament.