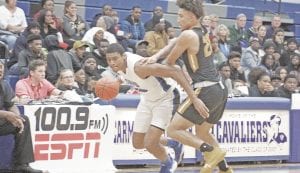 FLINT—The Carman-Ainsworth basketball team started its season on the right foot Tuesday night, dismantling Saginaw High 75-54 in a game that was much more lopsided than its score.

“We were trying with our pressure to get out and get some open runs,” said Cavaliers’ coach Jay Witham. “We pressed and got some easy buckets. It went both ways. They tried pressuring us, and we were fortunate enough to get to the basket and finish. Then we were able to turn them over and then get out and run to get easy baskets.”

The Cavaliers opened the game on a 9-2 run in the first three minutes, punctuating the spurt with an and-one dunk by Carman-Ainsworth’s big man Michael Fletcher. Rolaunde McCree ended the quarter with a steal, followed by a pull-up jumper from the free-throw line in transition, extending the Cavs’ lead to 22-11 heading into the break.

The second frame was more of the same, as Carman-Ainsworth outscored the Trojans 23-11. In addition to allaround dominance by Fletcher, the quarter was highlighted by the play of Mehki Ellison and Isaiah Jones, a freshmen duo making their first varsity appearances. Jones tallied six points in the quarter, while Ellison set the pace and distributed the ball from the point guard position. The Cavs scored their final points of the half when Ellison hit Jones with a crisp pass, which then led to a thunderous dunk by Jones. Carman-Ainsworth took a 45-22 lead into the break.

“I was definitely a little shocked with what they did bring (to the table),” Witham said of his freshmen pair. “I knew they’d have some piece there, but I was not expecting what they brought. I thought they’d come in with shockand awe a little bit, but obviously they didn’t. That puts a smile on my face; that’s for sure.”

Fletcher scored the first two baskets of the half, raising his total to 18 points and the Cavs’ lead to 49-22.

“He does handle the ball decently,” said Witham of Fletcher. “What’s nice about him is that he can handle it a couple times and then look over the top (to make a play)”

With time running out in the third quarter, Jones secured a rebound and went coast-to-coast for a basket. On the next possession, Dallas Green drove to the hoop and scooped the ball into the basket, extending the lead to 61-31 heading into the final frame.

The fourth quarter was sloppy, as both teams cleared the bench, but Jones and Ellison didn’t let up. Jones added another monstrous throw-down, while Ellison drilled a three-pointer, giving Carman-Ainsworth its final points.

“We played them over at Michigan State in the summertime,” said Witham of Saturday’s opponent. “They got us by a couple points. They pressure all over the place and do different kinds of three-quarter court and full-court stuff, so we know they’re going to bring that. They’ve got some length, so hopefully that doesn’t bother us.”