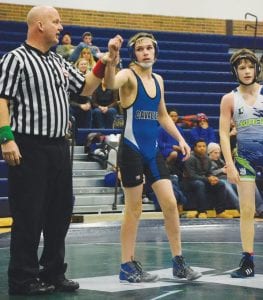 Jacob Yost earned a victory for the Cavaliers in conference competition at 112 pounds last week.

LAPEER — Even though Jacob Yost pinned Kane Sweet in :40 at 112 pounds the Carman- Ainsworth varsity wrestling team still wound up losing at Saginaw Valley League rival Lapeer 51-25 on Jan. 14. Also claiming victory was Damion Wilkes by major decision against Tyler Jarema 10-2 at 125, Nathan Delong beat the Lightning’s Tannes Wiills 15-9 at 135 and at 140 the Cavs’ Darien Vaughn stuck Jasiah Wells in :48. Milik Dawkins won by fall in 1:11 over Austin Irelan at 17.

In tournament competition at the Williamston Mooney Classic last Saturday, Carman-Ainsworth placed seventh in a 22-team field led by sophomore heavyweight Grayden Hamilton in fifth place. Dawkins also excelled at this event by placing second at 160 after losing in the finals to returning state champion Logan Richie 3-1 and coming in third was Vaughn at 135 and Demteric Hall at 112.

Darien Vaughn won by pin at Lapeer on Jan. 14 at 140 against Jasiah Wells in under a minute.