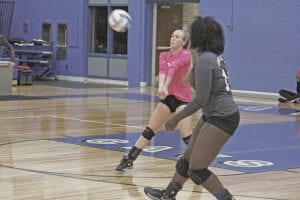 “We played very well,” Carman- Ainsworth coach Barb Hurand said. “We made some adjustments to give ourselves a chance to beat a tough St. Johns team.

“We knew they were big and would run a fast offense against us. I though we made it difficult for them to run their offense.”

Neither team could shake the other in the first set. The Cavaliers held a 19-17 lead late in the set.

A kill by Angel Eubanks put Carman- Ainsworth up 22-19. But St. Johns scored six of the final seven points to take the first set.

The next set followed suit with neither team able to shake the other. But once again St. Johns made the plays down the stretch to take the second set.

St. Johns was able to break away in the third set and went on to clinch the victory. But the 13-point final deficit didn’t tell the complete story.

“We’re a young team and although we struggled throughout the season, the girls showed tremendous improvement tonight,” Hurand said.

St. Johns moved on to the final where it faced Flushing Friday. The Raiders defeated St. Johns in straight sets to capture the district title.

Flushing opened the tournament with a 3-0 straight set win over Owosso last Monday. The Raiders then moved on to the finals by defeating Swartz Creek in straight sets in the other semifinal last Wednesday. – K.W.