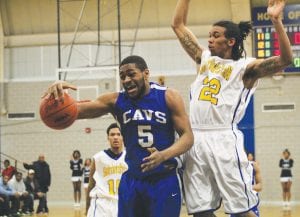 Carman-Ainsworth’s Jaylen Bradley controls a ball in last Friday’s game at Southwestern. Bradley had 25 points, but the Cavs fell to the Knights 67-64.

FLINT TWP. – A missed free throw in the final seconds doomed Carman- Ainsworth to another close loss in boys’ basketball Tuesday night, this one by a 38-37 count to Owosso in a non-league game.

The Cavaliers have lost four straight games by three points or less in falling to 2-8.

Last Friday, the Cavs lost to Flint Southwestern Academy 67-64 in a Saginaw Valley League-South matchup at Southwestern. Bradley scored 25 points and Giles added 12 as Carman- Ainsworth posted its highest score of the season.

The Cavs took a 21-18 first-quarter lead but were tied 35-35 at halftime. They were up 50-48 after three quarters, but Southwestern pulled it out with a 19-14 fourth. Evans added eight points and Cahlil Brownlee seven for the Cavs. Neshua Wise led the Knights with 24.