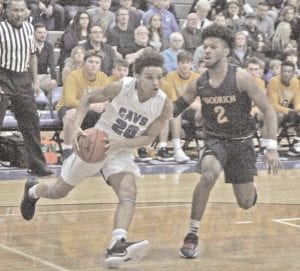 Carman-Ainsworth’s Mehki Ellison drives to the hole during the first half of Tuesday’s win over Goodrich. Photo by Joe Oster

FLINT – The Carman-Ainsworth boys’ basketball team defeated Goodrich 61-58 in Tuesday night’s overtime thriller, as the Cavaliers handed the Martians their first loss of the season. Goodrich had a shot to send the game into double overtime, but Carman-Ainsworth’s Mehki Ellison blocked the Martians’ final three-point attempt at the buzzer.

“We just knew we couldn’t give them any threes,” said Ellison. “That would tie the game up and go to another OT. We didn’t want another [overtime], so we had to get a big stop.”

Ellison was also the hero in regulation, as the sophomore point guard nailed a three-pointer with 0:16.7 left.

“We needed some points, and I just [wanted to] come up big,” said Ellison. “Jayden [Nunn] was attacking and dishing, and I was wide-open. I was ready for the shot.”

The triple, which was assisted by Jayden Nunn, gave Carman-Ainsworth a 52-50 advantage and its first lead of the fourth quarter.

“That was just our basic stuff,” said Cavaliers’ coach Jay Witham of the play. “We call it one-guard. It’s 1-3-1 type stuff against a 2-3 [zone defense]. That was just basic stuff, and we actually executed it. I think we got [the ball] to the baseline, then the high post, and I think we skipped it and reversed it. We got the defense to move, and we got a wide-open look. That’s what you got to do in basketball. You got to play insideout, and we actually did that a little bit tonight.”

The excitement was short-lived, however, as Goodrich’s Tyson Davis sank a pair of free-throws with 0:03.2 left to send the game into overtime.

The extra frame was back-and-forth until Nunn scored the game’s final points, nailing a three-pointer from the right wing to give Carman-Ainsworth a 61-58 lead with 0:20 remaining. The shot was assisted by Jason Green.

The Cavaliers opened the game on a 15-11 run, but Goodrich cut the deficit to 26-24 by halftime. The Martians controlled the third quarter with a 14-7 run, taking a 38-33 lead into the final frame. Carman-Ainsworth then closed regulation on a 19-14 run to send the game into overtime.

“I think we kind of got out of our feelings,” said Witham of the difference between the third and fourth quarters. “We started sharing the ball and making extra passes. We started doing what we’ve done in practice to go against the 2-3 zone.”

Witham noted the differences between the Cavs’ performance in Tuesday’s win against its 66-58 loss to Mt. Pleasant on Monday.

Ellison scored a team-high 18 points, 11 of which came in the fourth quarter and overtime. He also finished with four three-pointers. Nunn added 17 points.

“It’s nice to have, but I think we have more guys if we step up with pride and heart that can do that also,” said Witham of his two leading scorers. “I don’t think we’re limited to two guys here. We’re a good 9 or 10 deep team. On any given night, anybody can step up and show what they got, and today it was Jayden and Mehki.”

Isaiah Jones and Patrick Hollis finished with 10 points each for the Cavaliers. Jason Green added four points, and Rasheed Brown had two.

Nunn and Ellison led the Cavs with 12 points each. Darrell Scroggins scored 10. Green, Jones and Brown added eight points each.