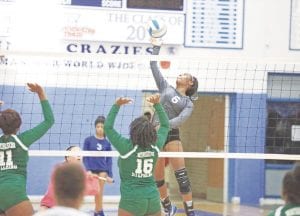 Diamond Lester goes up for a kill during a match with Northwestern Sept. 20.

The loss drops the Cavaliers to 1-2 in the Saginaw Valley League. Katie Speaks had eight digs and Mary Dollinger added three aces for the Cavaliers.

“Powers created a lot of problems for us on serve receive and defense which didn’t help our offensive attack in the match, Cavaliers coach Barb Hurand said. “We really struggled on communication and aggressiveness.

“We need to work harder to improve and communicate as a team in practice and bring it to the game.”

The Cavaliers dropped five matches at the Lake Fenton tournament Saturday. Carman-Ainsworth opened with a 25-13, 25-10 loss to the sixth-ranked team in Class B, Pontiac Notre Dame Prep. The Cavaliers then lost to 25-11, 25-11 and Cass Tech 25-16, 25-19. Carman-Ainsworth then lost to eventual champion Ann Arbor Gabriel Richard, the fourth-ranked team in Class B, 25-11, 25-13. Dollinger had 19 assists, Speaks had 24 digs and Cashae Harris had three solo and six block assists.

“It was a tough day for us with some good spurts, but all four teams we played were pretty solid, quick, and had several explosive hitters that really took it to us,” Hurand said. “I was proud of how hard we played and some of the great defensive digs we made against some great hits.”

“We fought hard against Flushing,” Hurand said. “Flushing is a good team and I thought we were very competitive against them. We had some close scores until a couple of Flushing servers went on a run against us to pull away.” – K.W.