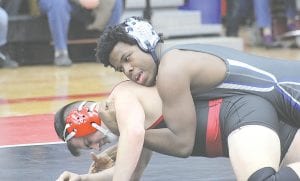 Carman-Ainsworth’s Chase Williams works to overpower a Grand Blanc opponent during a meet on December 18. Photo by Joe Oster

MILLINGTON – The Carman-Ainsworth wrestling team lost 72-6 to Millington and 48-12 to Saginaw Michigan Lutheran Seminary during a quad at Millington last Wednesday.

Against Millington, Larry Brown, at 130 lbs., was the lone Carman-Ainsworth winner, defeating his opponent by fall at 2:00. At 135, Sonny Morgan lost by fall, as did Noah Burn, at 140, and David Mathis, at 189. The match at 171 was a double forfeit and the Cavs lost by forfeit in the rest of the matches.

In the dual against Michigan Lutheran Seminary, both Brown and Morgan earned wins by forfeit. Losing by fall were Burn and Mathis. The matches at 103, 112, 140 and 285 were double forfeits, and Lutheran Seminary won by forfeit in the rest of the matches.