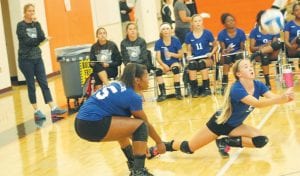 Carman-Ainsworth’s Diamond Lester makes a play on the ball during a match against Holly.

“We really struggled at the service line and receiving serves,” coach Barb Hurand said. “It’s very difficult to gain momentum when we miss the amount of serves we missed.”

“This was a great match,” Hurand said. “We lost game one and came out very focused to win this match.

“We were a complete team tonight. Everyone was on fire whether they played or not.” — K.W.