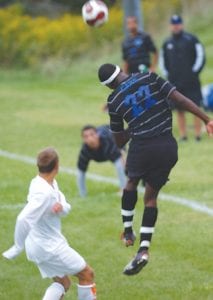 Kaleb Harrison’s effort was not enough as the Cavs lost their district opener.

FLINT — The Carman-Ainsworth soccer season came to an end in the first round of the district playoffs Monday as the Cavs fell to a tough Saginaw Heritage team, 4-1.

The Cavaliers Alex Sarver scored the lone goal for Carman-Ainsworth with Kamron Marsh assisting. Colin Heaton was in net for the Cavaliers, and he was solid with eight saves on the night.

Saginaw Heritage advanced to the second round of the district where it faced ninth-ranked Grand Blanc yesterday for the right to play in the district final against the winner of the Davison-Swartz Creek match also yesterday. The final will take place Saturday at noon at Flint Kearsley high school.