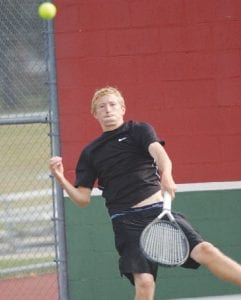 Matt Nagey swatted a forehand shot at a regular season match for Carman-Ainsworth.

In the end, the Cavs ended up in last place at the regional. A deep and talented Grand Blanc boys’ tennis squad used not just its veteran singles positions, but its doubles tandems to win a fourth straight regional title at Holt last Thursday.

Teams must win a regional, place second or earn 18 points to move on to the state tournament. Winner and runner up at No. 1 Singles automatically qualifies.

Grand Blanc won with 27 points, Holt was second with 20 and Hartland missed the cut with 14 points. Brighton placed fourth with 11, Howell was fifth with 8, Davison and Grand Ledge tied for sixth with five points, Saginaw Heritage was eighth with four and Carman-Ainsworth was ninth with two points.

Grand Glanc, Holt and the winner and runner up at No. 1 Singles move on to the state finals Friday and Saturday at the Midland Tennis Center. — L.P.