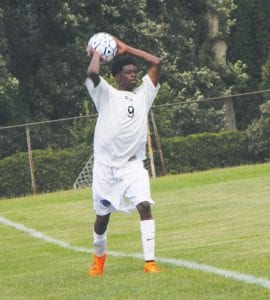 Derrald Bogan inbounds the ball for the Cavaliers during the first half of a home game.

FLUSHING — At Seymour Elementary in the first round of Flushing varsity soccer district No. 5-1 on Tuesday, Carman-Ainsworth was able to keep its defense tight, just not tight enough to avoid losing to the host Raiders 3-0.

In other round-one action, Clarkston defeated Waterford Kettering 5-2 and Davison beat Waterford Mott 3-2. Those two teams then met yesterday in the semifinals and the finals will take place on Saturday at 5 p.m.

In a Saginaw Valley League crossover contest that doubled as the final game of the regular season on Oct. 14, the Cavs lost at Bay City Western 2-1 after going into halftime tied 1-1. Scoring for Carman-Ainsworth in the 38th minute of the game was Quinton Pincomb and goalie Ray Macko had seven saves.

“Good all around game. BCW did a good job attacking our outside midfielders,” said Carman-Ainsworth coach Jay Witham.

Defensively, the team allowed goals by Noah Glazier-Gravlin in the 23rd minute of the first half and Collin Krygier in the second. Making six saves was Brendan Rievert.