Cavaliers eliminated in soccer by Lapeer 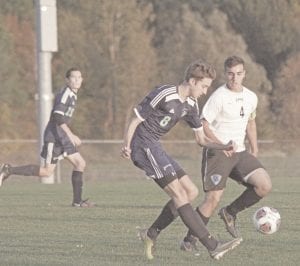 LAPEER – The Carman- Ainsworth boys’ soccer team opened the Div. 1 district with a 3-0 loss to Lapeer Tuesday. Lapeer hosts the district, but all first-round games were played at non-traditional sites.

Both teams were held even at 0-0 by halftime, but Lapeer took off in the second half to seal Carman- Ainsworth’s fate.

Lapeer’s Brian Morris tallied a pair of goals for the Lightning to go up 2-0. Carman-Ainsworth then scored on itself for the final goal of the game. The Cavaliers finish the season out at 5-13 overall.

Lapeer will move on to face Grand Blanc, 11-7-1, today at 5 p.m. at Lapeer. Grand Blanc defeated Saginaw Arthur Hill 14-0 in the opening round at Grand Blanc to advance to the semis.