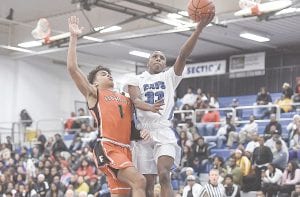 Carman-Ainsworth’s James Robinson takes it to the hole against Flushing on Jan. 4. Photo by Todd Boone

Lake Orion came out the gates firing, jumping out to a 14-4 advantage by the end of the first quarter. The Cavaliers battled back in the second but were not able to overtake the Dragons by halftime, facing a 24-21 deficit. The rest of the game mirrored the second quarter, as Carman-Ainsworth outscored the Dragons 17-11 in the third and 11-5 in the final frame.

Lake Orion was led by Jake Rydquist with nine points and Isiah Harris with seven.