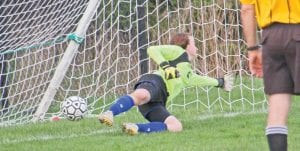 Carman- Ainsworth’s Arianna Vantine will be key in net for the young and rebuilding Cavaliers as they enter district play on Tuesday.

Grand Blanc has to be considered the favorite after making a long tournament run last season. The Bobcats have won Kensington Lakes Activities Association championships in the West Division and the Lakes Conference.

They were looking to add their first KLAA Association title in last night’s game with Novi. They are ranked fifth in the latest Division 1 state coaches poll and are the only ranked team in the district.

The road to a title will be a tough one for the Cavaliers. They will have to play some of their best soccer to advance.

The Cavaliers had one of their best outings of the season when they defeated Northwestern 11-0 Monday, May 9. Brittany Young, who had three goals in that match, will be counted on to provide some offensive punch.

Nisreen Shukairy and Destinee Lester are two more who can provide offensive punch for the Cavaliers. All three will have to score if Carman-Ainsworth has any hopes of knocking off the powerful Bobcats. – K.W.