Cavaliers fail to qualify for state 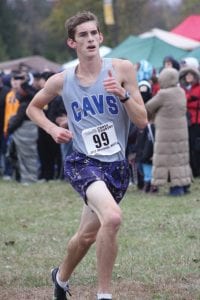 Carman-Ainsworth’s Tyler Pangerl rounded a bend in the course at a regular-season race.

That’s what Carman-Ainsworth’s Tyler Pangerl did Saturday at the Div. 1 Region 2 regional race at Delta College. Pangerl posted the Cavaliers fastest time, just as he has all season long, finishing in 39th place in 17:20.22. Only the top three teams and top 15 not on a qualifying team move on to the state meet at MIS Speedway in Brooklyn, Mich. Carman-Ainsworth’s next racer finished in 58th place when James Johnson crossed the finish line in 17:47.28. The remaining Cavaliers’ boys placed around 100th place with Ahmir Dunn in 97th in 20:11.24, Juwan Willis was 98th in 20:25.76, Aaron Sedrick was 103rd in 22:17.81 and Keith Belk was 104th in 22:25.45.

The Lady Cavs are a very small squad of forward-thinking track runners looking to up their endurance and strength. In their first year of racing cross country, Bailey Curtis has been the top runner, despite the daunting task of looking at a lot of backs this season. Curtis placed 98th in 29:16.03 and Teaira Davis was 101st in 34:51.41.