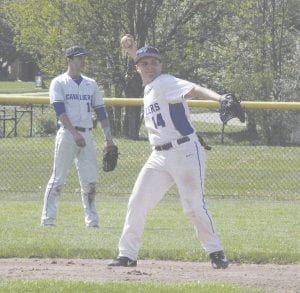 Carman-Ainsworth’s Jacob Durbin gets ready to make a play during a game against Bendle on May 22. Photo by Brandon Pope

FLUSHING – The Carman- Ainsworth baseball team was knocked out of the postseason after falling to Swartz Creek 12-3 in the district semifinal at Flushing on Monday. The district was suspended Saturday after strong storms rolled across the state.

Carman-Ainsworth grabbed a 3-1 lead in the first but was held scoreless the remainder of the game, as Swartz Creek added two in the third, two in the fourth, four in the fifth and three in the sixth.

Garrett Gleason had a hit and two RBI. Cameron Koegel and Hogan added a hit and a run each.

Flushing then beat Swartz Creek 9-0 to win the district. Flushing had defeated Saginaw Heritage 8-4 in the semifinal and took a win by forfeit over Saginaw Arthur Hill in the district opener.