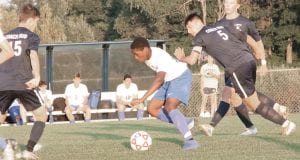 Carman-Ainsworth’s Mory Daio moves the ball through a gap against Lapeer on Sept. 16. Photo by Kylee Richardson

SWARTZ CREEK – Carman- Ainsworth’s soccer season came to a close last Wednesday when the Cavaliers were handed a 2-0 loss against Swartz Creek in the Div. 1 district opener. Brady Taylor scored both goals for the Dragons.

Swartz Creek was eliminated in the district semifinal in a 9-1 loss against Oxford on Tuesday. The Bobcats shut out Flushing 8-0 on Tuesday in the other semifinal. Grand Blanc had defeated Davison 5-0 in the opening round. Flushing had knocked out Lapeer in a 4-1 win as well.

Oxford will move on to battle with Grand Blanc for the district title at 6 p.m. at Grand Blanc today.