Cavaliers fall in opening round of district play 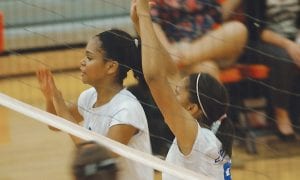 Aarin Townsend (left) and Re’Onna Harris guard the net for the Lady Cavaliers.

OWOSSO
— The Carman-Ainsworth volleyball team knew what it was up against when the district draws came out and it was paired with Flushing. The Raiders won another Big Nine title and had defeated the Cavs twice already this season. Carman was trying to make sure it did not happen for a third time this season.

The Cavs were not able to prevent that from happening as Flushing won, 25-15, 25-20, 25-16. Kamrin Gold led the attack for Carman with 19 kills, while Miya Ingram added eight and Danielle McClung made 28 assists.

The Raiders were led by Emily Wendling with 11 kills and 11 digs, while Jennifer Hurand had 18 digs, Lauren Fenton made 27 assists, and Connor Morrish added seven kills.

The Raiders moved on to face Owosso, which had a first-round bye. On the other side of the bracket, Saginaw Arthur Hill and Saginaw each received first-round byes and met in the semifinals yesterday at 6 p.m. The Raiders and Trojans faced off at 7 p.m. yesterday. 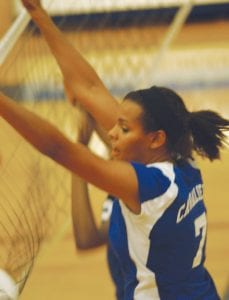 Kamrin Gold led Carman-Ainsworth with 19 kills in the district.