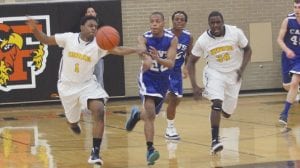 Carman-Ainsworth’s Jaylen Randle sends a pass down court during the Cavs’ playoff loss.

FLUSHING — The Carman- Ainsworth boys’ basketball team faced one of the top teams in the state last Wednesday in the district semifinals in Saginaw Arthur Hill, losing, 69-63.

The Lumberjacks entered the game with a 15-5 record and ranked in the top 10 in Class A. They wasted no time jumping on the Cavaliers with an 18-9 advantage in the first quarter. Arthur Hill extended its lead at the half with a 16-15 edge in the second quarter.

Arthur Hill was led by Jordan Hare with 25 points and 16 rebounds, Jalen Adams had 14 points and seven boards and Leonardo Parker added 12 points and three rebounds.

On the other side of the bracket, Saginaw defeated Flushing, 83-56. The Trojans defeated the Lumberjacks in the district final, 66-62.

The Cavaliers finished the season with a 14-8 record and as the final Big Nine champions in league history. Carman-Ainsworth joins the Saginaw Valley Conference next year as the Big Nine folds at the end of the spring season.