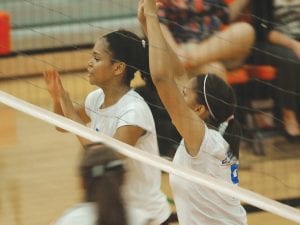 Aarin townsend (left) and Re’Onna Harris defend at the net for the Lady Cavs.

FLUSHING
— In a matter of three days, the Carman-Ainsworth volleyball team traveled to Flushing twice.

Last Saturday, the team returned to Flushing for the Flushing Invitational and finished 0-3-2 on the day.

Danielle McClung had 41 assist, 21 digs and 20 service points on the afternoon to lead the Cavs. Schneider had 42 digs and Aarin Townsend added 31 digs.