Cavaliers fall to Clio in baseball 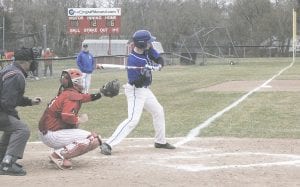 Carman-Ainsworth’s Ezekiel Ochodnicky gets ready to make a connection during a game against Swartz Creek on April 10. Photo by Brandon Pope

FLINT – The Carman-Ainsworth baseball team was handed a 7-3 loss against Clio in the Greater Flint Tournament on Saturday.

Clio took a 4-0 lead in the second. The Cavaliers tried to close the gap, scoring one in the third and two in the fourth. Clio then drove in three runs in the fifth to take the win.

Harrison Hogan tossed four innings, striking out four and giving up two hits, five runs and six walks. Sean Jerome allowed two hits and a walk in one inning and Garrett Gleason struck out three in one inning.

Gleason led the offensive effort with two hits and two RBI. Cameron Koegel had a hit and an RBI. Logan Brassaw, Alex Green, Jerome and Ezekiel Ochodnicky all had a hit each.

Last Thursday, Carman-Ainsworth split with Davison. The Cavs dropped the first game 12-1 but won the second 6-4.

Green toed the rubber for three innings, striking out two and giving up eight hits, seven runs and three walks. Ochodnicky threw two innings of relief, giving up three hits and five runs. Koegel had the only hit and run on the game, driven in by Green.

Koegel was 3-for-4 from the plate with three runs and an RBI. Gleason added two hits and an RBI.

In the nightcap, the Cavaliers scored one in the third, three in the fourth and 12 in the fifth. Jacob Durbin threw a no-hitter, striking out five and walking one.