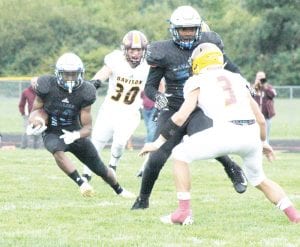 Carman-Ainsworth’s Chris Coleman looks for an opening in the defense during last week’s game against Davison. Photo by Brandon Pope

MIDLAND – A late interception led to the first loss of the season for the Carman-Ainsworth football team, losing 36-29 at the hands of undefeated Davison at home last Friday.

The Cavaliers took an early lead following a 26-yard scamper from Chris Coleman for the touchdown with 10:49 left in the first. Mohamed Farhan knocked in the extra point for the 7-0 lead. Davison responded with 25 seconds remaining in the first quarter with its first touchdown, coming off a 34-yard reception by Cal Stefanko from quarterback Cannon Hall, to tie the game at seven apiece headed into the second.

Dustin Fletcher helped Carman-Ainsworth regain the lead by hooking up with Jakobe Blount for a 62-yard touchdown pass at 9:28 in the second quarter. At 7:20, Farhan added a 23-yard field goal to bring the Cavs’ lead to 17-7. Davison then responded with a touchdown pass from Hall to Harrison Terry with 34 seconds remaining in the quarter to cut the deficit, bringing the score to 17-14 in favor of the Cavs.

Following the break, the Cardinals marched down the field and quickly scored on a 36-yard rush from Hall to give Davison its first lead of the game at 21-17 with 11:38 remaining in the third. Three minutes after, Tanayshio Dones found pay dirt on a three-yard scamper to give the Cavs the lead, but a blocked extra point left the score at 23-21 with one frame remaining.

Davison quickly scored again to start off the fourth, this time on a short two-yard scamper from Hall at 11:56, to lead 29-23 with just under 12 minutes to play. The score remained unchanged until the final three minutes, where Fletcher connected with Idris Bray for a 10-yard touchdown with 2:58 remaining, but another blocked extra point led to a 29-29 tie. Davison then put the game away scoring its final touchdown on a 12-yard run from Hall to go ahead 36-29 with 32 seconds to go. The Cardinals then picked off one of Fletcher’s passes on the following possession to thwart the game-winning drive.

Fletcher ended the day 20-for-30 passing with 287 yards and two touchdowns. Coleman had 71 yards on 14 carries, Fletcher recorded 21 yards on 11 carries and Dones picked up 18 yards on four attempts. Trent Baron had six receptions for 132 yards, Jakobe Blount had 61 yards receiving on four catches and Mike Fletcher had 54 yards on five catches.