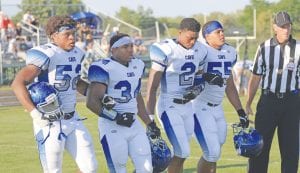 GRAND BLANC–Carman- Ainsworth’s varsity football team lost a shootout at Grand Blanc last Friday night, as the Cavaliers had trouble stopping a balanced Bobcat offense in a 49-25 non-league loss. The two schools typically face each other in the season opener.

The Cavaliers held the lead twice in the first half and trailed just 21-19 at intermission before Grand Blanc pulled away with four touchdowns after the break.

Troy Brown and freshman Dustin Fletcher shared quarterback duties while also carrying most of the load on the ground.

The Cavaliers scored first on a 30-yard touchdown from Brown to Marreon Givens. The PAT was good for a 7-0 lead.

After a Grand Blanc touchdown and two-point conversion toward the end of the first quarter, Carman-Ainsworth jumped back into the lead again.

Brown scurried in from a yard out at 7:55 of the second quarter, and after a missed extra point, the visitors clung to a 13-8 advantage.

The Bobcats responded, scoring twice within the next six minutes of play to regain the lead and establish a 21-13 cushion. But Carman-Ainsworth struck in the final seconds of the first half on a pass from Fletcher to Brown that covered 22 yards. The two-point conversion-run attempt failed, however, and the Cavaliers trailed, 21-19, at the break.

The Bobcats sandwiched two touchdowns on either side of a lone Carman- Ainsworth score in the second half. A 6-yard scoring aerial from Fletcher to Brown accounted for the only six points of the second half for the visitors.

The Cavaliers were able to move the football effectively most of the night, especially on the ground, where they rushed for 259 of their 390 yards of total offense. But a potent Grand Blanc offense that amassed 503 yards, along with two interceptions and a lost fumble by Carman-Ainsworth, proved too much to overcome.

The Cavaliers will journey to Saginaw this Thursday to take on Saginaw Arthur Hill in a league contest. Game time is 7 p.m.