Cavaliers fall to Midland at the buzzer 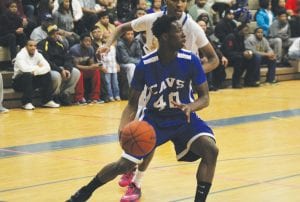 Cahlil Brownlee dribbles inside the paint for the Carman-Ainsworth boys’ squad.

FLINT TOWNSHIP — The Carman-Ainsworth boys’ basketball team lost a heartbreaker against Midland on Tuesday after a Midland player was fouled in the waning seconds, then hit both free throws for the win, 46-44.

Midland held the one-point advantage after one quarter, 9-8 and outscored Flint 11-4 in the second. The Cavaliers outscored Midland 15-14 in the third and 17-12 in the final quarter.

Jakavien Lewis led with 15 points and Jaylen Bradley had 13 for the Cavs.