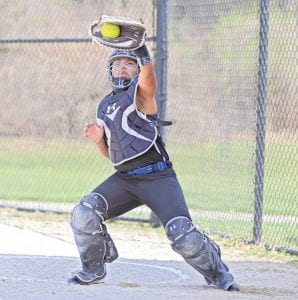 Catcher Jada Black hauls in the ball for the Cavaliers during an April 19 game.

FLINT TWP. – Carman-Ainsworth softball hosted Midland Dow on Monday in Saginaw Valley League action and lost to the Chargers in both ends of the twinbill, 9-6 and 21-3.

In the opener, Sarah Thurston had two hits while Jada Black and Madison Cox each registered one. Mikaila Garrison, Thurston, Ally Dittenber and Alexis Ritchie had a hit apiece in the finale.

Carman-Ainsworth topped Grand Blanc 4-2 on Friday in game one before falling in the nightcap, 14-3. Black had three hits in the opener, Morgan Sherrer and Dittenber tallied two hits each and Garrison ripped a double, which clinched the game by clearing the bases. Garrison also had two hits for two RBI in the finale.

Last Thursday, the Cavs simply dominated Flint Southwestern at home, 17-2 and 18-2. Makala McDaniels, Garrison Thurston, Dittenber and Taylor Jarnigin each had two hits in the first game. In the nightcap, Chyenne Pearson, McDaniels and Sherrer each put up two hits and Diariona Fleming and Ciera Fogarsi had a hit apiece.

The Cavs traveled to Saginaw Arthur Hill on April 25 and won both games convincingly, 16-0 and 18-1. Black and Jarnigin each had two hits in the opener and Sherrer, Victoria Young and Fogarsi had one each. Black had two hits in the second game and Dittenber stroked a triple.

At Saginaw Heritage on April 21, Carman-Ainsworth lost to the Hawks, 9-3 and 10-0. Madison Cox recorded a double in the opening game.

Carman-Ainsworth was at Linden yesterday and travels to Saginaw today. – B.P.